Feathered lands settling on sunset skies,
Blackbirds whispering codes
Well-versed in melodic intrigue,
Prickled all over
By broom-blossom belle-dames,
A net of nerve-endings
Emanating from a nervous system
Incapable of forgetting

From chords strung on moon-bent harp,
The host of Venus on ecliptic string,
Puppetry of stars, jarred by serenity,
Dial tones of birds on the wing

The tree grew out of my chest

From the black, bloody stump,
Malignant and redundant, coppiced
To death by the bleakest of winters,
Through the fogbanks and menace of tundra,
It started to put out new shoots,

Up-thrusting through the snow,
And the fears of frozen droplets,
It revealed the burst of little buds,
Tender and pregnant with promise,

Around my ribs, scarred wasted pectorals,
Mossy clumps gathered in flanks,
And skylarks sang on the bosky hill,
Where my body had lain withered, dormant,

Incubated in an ocean of soil,
My legs became a flowerbed,
And violets and anemones
Thrust through my follicles,
To laugh with the uproarious sky

It is too soon yet,
To see how these innocent saplings
Could become a mighty oak,

But in their naivety,
Reaching for the sunlight,
They learn the painful hope of growth 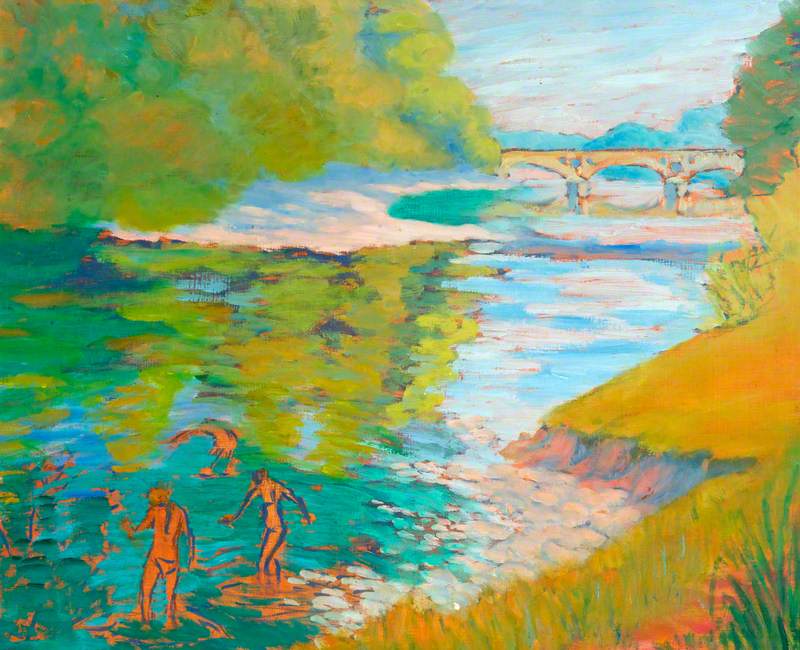 Now knight the nape of darkening sky,
The loss of life we leave,
Callous crush of clawing cry
Gives back the green we grieve 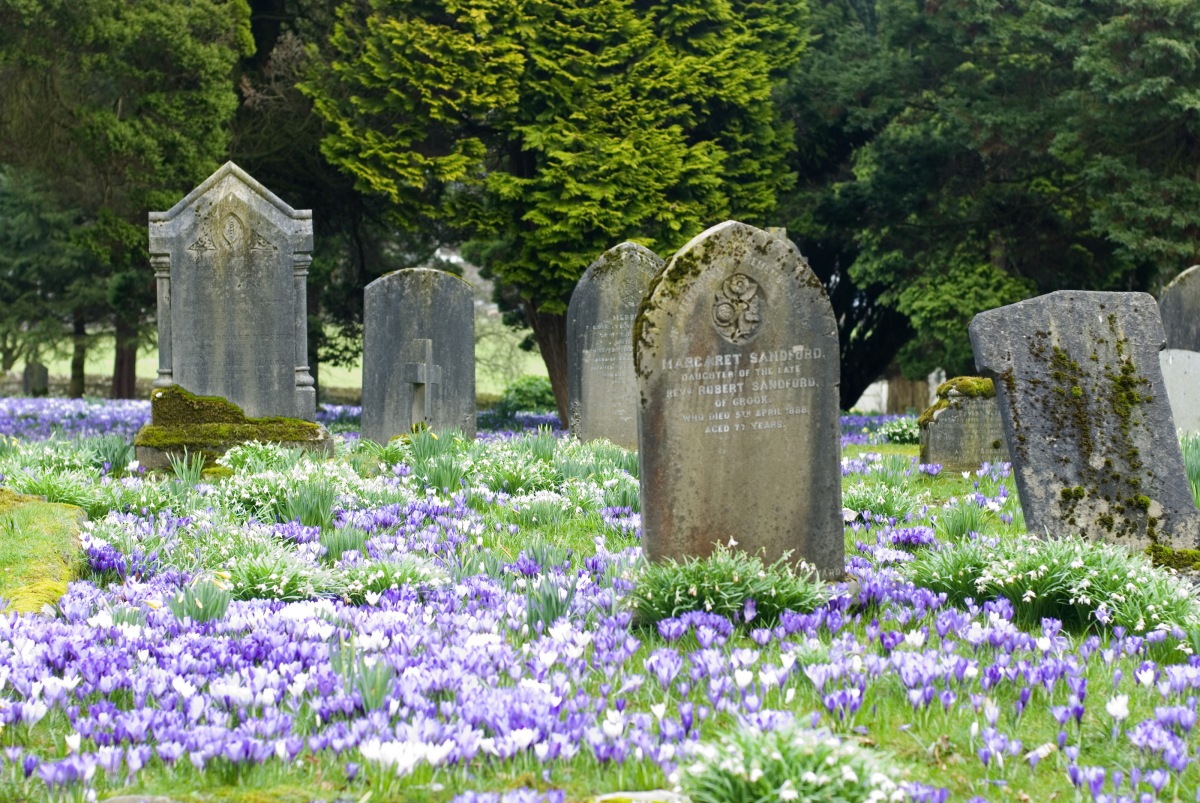 In the midst of Death, we are in Life,
Where green hollows give riot to full-flower thoughts,
To the mocking of yaffle and titian speedwell,
Benches so little sat on, grasses grow between their ribs,
Reclaiming to ruin, ivy-bound

The beauty of tombs almost justifies the killing,
Lichen UFOing in annular growth,
The space between songs
Are the lips of the bell,
Kissing your hours into subsistence

Fed on the flesh of sundial birdsong,
When shadows are secondary
To the sovereignty of light,
Corpses exploding into bluebells,
Fully-clappered, with the eternal pulsation
Of several Spring seconds

All is complete in the green of young leaf,
Pointing to where eternity beckons

Swallows fly in and out of St. Illtud’s,
Singing mass in melodic whispers,
They do not sit still for the communion of the saints,
But dance dizzyingly with them in the air,

Perhaps they are etching Ogham on the sky,
Writing invisible vapour trails of all that’s gone by,
William Blake winks out at you from the fire place,
Fumigating with the black smoke of truth

The silting of sand trailing over vital hands,
Scratched hard by the certainty of proof

Counting out the change of marsh pennywort,
The Sea is the finest architect,
Thinking not of porticos, corbels,
Synthesized by this architect’s moist fingers,
The real estate of Blue Mother Sea,
Puts seaweed in the drowned lungs of singers

Her body is crystal,
Melted and given motion,
The rhythmic undulations of sparkling sapphire,
Symbol of the subconscious’s cryptic emotions

In the bellies of grey limestone caverns,
The latticework of maritime honeycombs,
Wrought with striations of ochre and quartz,
Red torsos webbing between earthed gasps
Of landmass

The fishermen will be given a separate church,
So their scent offends not the men of God,
While God himself huffs all the perfume of the world,
Caring not if it is shit or vanilla

Scurvygrass will be the fruit of your arthritis,
When the sea counts back the bricks of your digits

The light always falls on Llanwenarth,
Yet indirectly, rays knifing through clouds,
Exploding from stitchwort, and the soft glow
Of yew-secreted corridors of violets

Yet stones can only birth themselves
From the bones of others,
Hearkening to the cries
Echoing against their cavities,
Like lover nestled in caverns of lover,
Joy-pain of Self confronting the Other 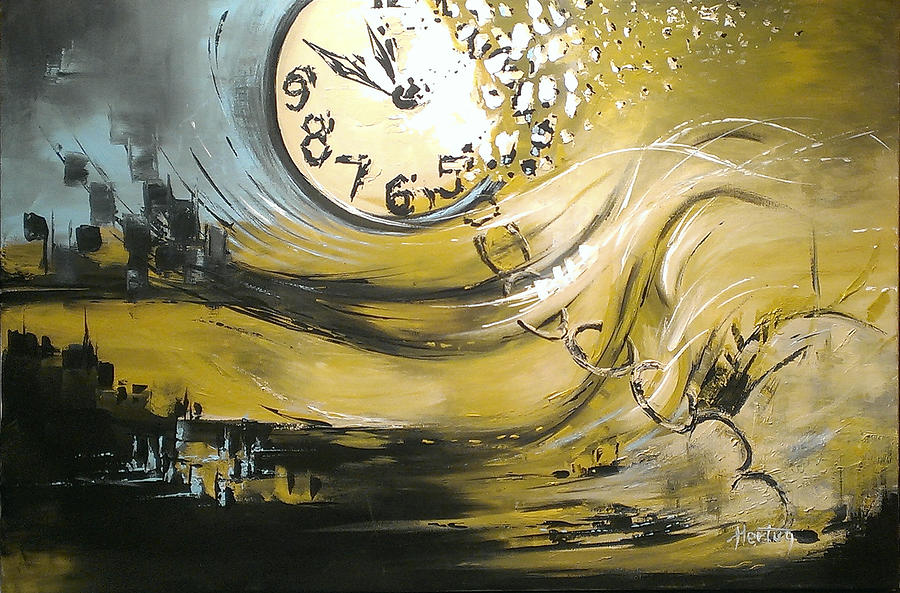 The Immortal sat on a tree stump,
His long, sloping forehead, a pinnacle of rock,
Robes of faded vermillion, a petrified languor,
Carved into the lineaments of his face,
An ancient parchment whereon was writ
A depth of sorrow unknowable to man

When you live forever,
Your eyes become portals sick-glutted on suffering,
Fortitude the only friend keeping you up-propped,
Crossing interminable wildernesses, clambering
Over the serried dead in their wormy trenches,
Bones powdered into rocks,
Rocks compounded into worlds,
Where new wars may be fought,
And the ugly process repeated

Unable to die, you cannot separate from it,
It lives in you, and you in it,
Passing before your eyes – a dream of dust –
An illusion cast – a spell unbroken –
Like Sisyphus, every time you think you’ve broken through,
The vapours of illusion swell up from the lagoon,
Leaving a simulacra in its place

The oak stump upon which The Immortal sat
Was the last relic of an ancient wood,
Over which he’d presided for ages uncountable,
Having tired of the tortures and endless wars
Of the stars systems through which he travelled,
He withdrew to the relative quietude of planet Earth,
Then little peopled, where he could hold converse
With volcanoes, and meditate in mid-air above
Lava fields, reigning in tranquillity aloft
The times and tides of Creation,
Where the serenity of all-pervading ocean,
Could be suddenly thwart into torment by storms,
And abruptions of equal duration, jungles sprouting
Up in the passing of a year’s breath,
Then eaten up by swamps anon

My imagination does me more credit than my pen
Can express – or so I tell you as The Immortal passed
Gently through the birth throes of pre-history,
Swimming beside giant trilobites – by ambitious
Lifeforms with spiralling flagella, and other spawn
Worked by infinity’s ingenuity, radially proliferating
In a concourse of unlikely ways, to secure their time
Upon this uncertain world – creatures some of us
Still spy in dreams and visions, long since re-housed
In the Earth’s magma core, never to be seen again

After the last Ice Age,
When the world began to take a shape
We might recognize,
The Immortal settled in the wood aforementioned.
He kept watch over the birds,
Returning fallen chicks to their nests,
He knew the names of every new bud,
And kept in discourse with the elementals
Who performed their office in these woods.
Leaf-growth, sap-rise, wing-shuffle, and silenced
Preen were the notes of his flute;
Bird call and bush-rustle were scratchings
Within his throat. He was the sacred storehouse
From which all birds gathered their songs;
The unseen muse from which robins
Derive their twelve-month rhapsody

For thousands of years, these woods went unhaunted
By unwanted men – an enchantment spread from tree
To tree to keep the peace of the place in humble perpetuity,
Preserved in the amberous damask of unfading twilight,
Enwombed in a glow, fireside lambent,
They remained in a state of ceaseless merriment,
Boycotting all seasons but Spring.
Lute, harp, and merry bells jangling
To keep the goodness in – an unpunctured yoke
Of log-snug warmth, where no tree was felled
But by the consent of the wind,
Or The Immortal’s wise sense of order

But this Golden Age could not remain forever.
As violently inconstant as the molten mountains
That gave them form, the Earth grew ripe,
Grew dizzy for change. Man spread like small-pox
Over its once fair face, carving up the land
To prostitute it to their wants.

All around the wood,
Landscapes were tarnished to suit their ways,
Land-fills, quarries, the thoughtless proliferation of waste,
Garbage everywhere man was,
And even where he was not,
Lakes gave up their dead,
Vomiting amphibious refugees,
Newts and frogs, fish fiercely hungry for legs
To escape the toxins eating into their scales,
Mountains mined, the whole world suffocated
Beneath the carapace of cement – skies criss-crossed
With fumes – rivers red with copper and rust –
Every creature and thing now marketable and priced,
Life only worth the telling of its death-hardened function,
The pleasure it can give to the luxury-fat rich

The Immortal knew the wood’s days were numbered,
The encroachment of machine and saw not forestalled,
The spells could not stave off the men
Who lacked mind enough to know magic existed at all

The Immortal did all he could,
Pleading with interdimensional councils who might intervene:

“Take me!” he implored. “Let me sacrifice my immortality,
And infuse it in the soil of this wood,
So these trees will be axe-impervious as diamond flesh,
And the birdsong as though music from an eternal book
Inked Akashic upon the sky. Let there be at least one place
Upon the Earth where man’s murderous fingers cannot pry.”

But The Council would not give their consent –
Too much Karma and interdimensional red tape.

“An immortal born must immortal be,
Quitless of time or the tides of the sea.”

And so he saw it done:
Every tree cut down –
Every bird unhoused –
Every spirit cast out to be reborn
As a curse upon those diseased enough
To quit them

Which is why you see him here now,
On the un-uprooted stump of the last remaining oak,

And as grief runs proportionate to the lives its afflicts,
I don’t know if I’ll ever have the comfort,
Or the sadness,
To watch The Immortal move on

The Red Kite flies over Wales,
Protector Bird, Saviour Bird, Ill-Treated Bird,
Once London’s collective, necrophagous janitor,
Reduced to extinction by trigger-happy morons,
Withdrawing into Wales’ brooding mountains,
You brooded along with them, biding your time,
Until another generation would see your mermaid’s tail,
As a thing to preserve from danger 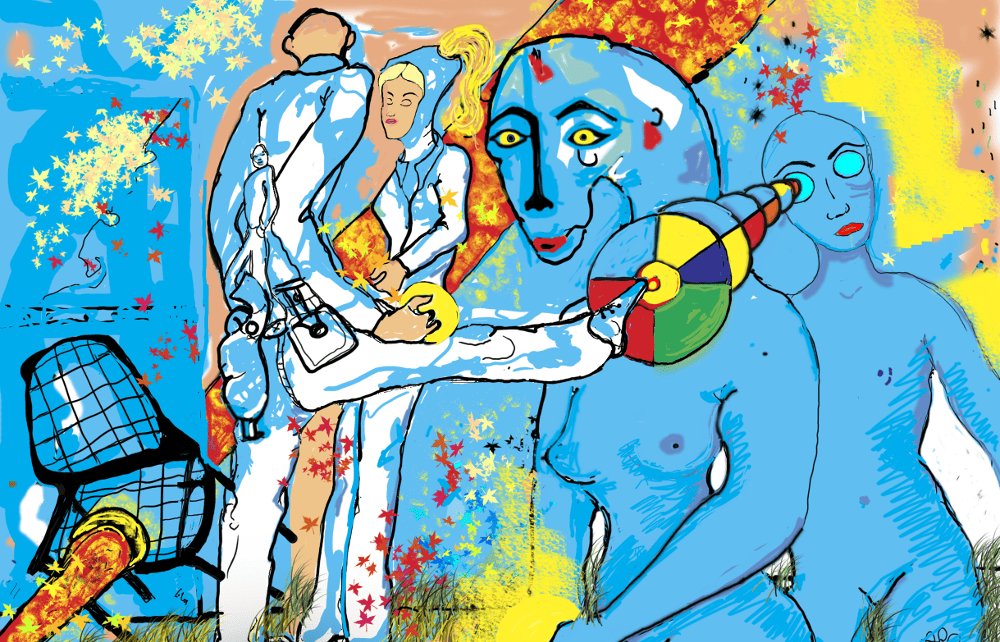 Fish fins lazily through pondwater,
An artificial sea made to capture its beauty,
Like a dry-pressed moth trapped between glass,
The viewed is the victim of the viewer

“Isn’t nature wonderful?” people grandly say,
“Let’s make it smaller so we can see it more clearly.
I want be able to hold nature in my hand’s palm, and say:
Look – it’s Nature – I’ve got it.”

You have nothing but a trinket, a bauble,
My friend, my enemy,
A eunuchized gewgaw to show your family,
Your relationship with nature is not a fucking status symbol;
It’s a token denial of the truth within you

If you want to really know nature,
You have to be prepared to grow grass in your throat,
To vomit leaves from the twin-cyclones of your lungs,
To let the vines tie you, Gulliver-like, to the ground,
And accept yourself as equally ridiculous and small

Your identity is not you – it is your parity of connections,
It is the interzone were peripheries merge and meet,
And you are sacrificed to the god of your own daughter

The Daughter of Heaven,
The Unearthly Bosom,
To be exposed to the piercing Earth